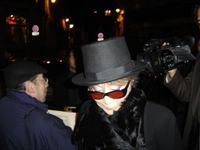 Yoko Ono will perform in Paris on her birthday on February 18th 2006 at Théâtre du Châtelet.

This completely new performance will consists of audience participation, video and music.

Kicks Off New Release In Classic Prince Style(New York, NY, February 14, 2006)
-- In what is sure to be one of the seminal music events of the year, Prince will release is Universal Records album debut, 3121, on March 21st. The much anticipated disc is being hailed as ‘classic’ Prince, the multi-talented superstar’s first studio album since 2004’s acclaimed album Musicology, and features the songs “Te Amo Corazon” (I Love You Sweetheart), “Beautiful, Loved & Blessed”, featuring rising R&Bingénue Tamar, and Prince’s newly released single, “Black Sweat,”

As anticipation for 3121 builds throughout the entertainment industry, Prince is providing a bonus surprise for fans that purchase the album beginning March 21st. Billed as the ‘Purple Ticket Capmaign,’ a limited number of purple tickets will be included in specially selected albums, entitling the lucky purchaser to attend what is being hailed as An Evening With Prince – A Private Performance At Prince’s House. Digital tickets can also be won through Apple’s iTunes online music store.

Most recently, the tireless singer/songwriter was inspired to write two songs to benefit Hurricane Katrina victims, “S.S.T.”, and “Brand New Orleans,” both of which are available on www.NPGMusicClub.com.

This div will be replaced