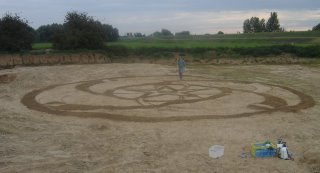 HELLWOOD Creaping 2 to a store near U

Hellwood is Johnny Dowd, Jim White, and Willie B; three distinct
songwriter/musicians brought together by years of friendship, mutual respect, and camaraderie. You may be familiar with the individuals involved and their separate contributions within the outsider diaspora; those un-navigated waters beyond the perimeter of everything ordinary and sanitary that is the modern industrialized music industry.

Recorded in a cabin in central New York, in a room with walls covered in newspaper clippings of musician obituaries, "Chainsaw of Life" is something greater than the sum of its already compelling parts. Taken as a whole, it transcends the trio's individual output for accessibility. Johnny Dowd's grizzlier edges have been tempered. Jim White's intricate soundscapes have been knocked about and roughed up. Willie B's instrumental exotica has been dragged out of the closet and onto the street.

Johnny and Jim are master storytellers and this album is a compendium of a world abandoned by both God and The Devil - a disillusioned couple contemplate suicide to remedy a loveless marriage; con-men use religion to control and steal; a soldier runs away from battle and his best friend dies as a result. Much like Dowd and White's recent film, "Searching For The Wrong-eyed Jesus", this is a travelogue through a hidden America that these
writers know intimately.

When Hellwood hits the road, they will be backed on keyboards by Mike Stark (currently in the Dowd band and Tzar, his duo with Willie B). "Chainsaw of Life", due to contractual obligations, will only be available in Europe.

This div will be replaced